Coding Bootcamp vs College: Which Will Help You Land the Most Prestigious Jobs in the Tech Industry?

Sung is the founder and CEO of Optimal, the parent company of SwitchUp. Sung has been featured in several publications, including GeekWire and 425 Business Magazine. For a more in-depth look into Sung's background, check out the CEO Perspective he authored.

Ten years ago, getting a degree in computer science was the only real way to enter the booming tech field. Today, students have another option to gain hands-on skills in software development thanks to the rise of coding bootcamps over the last decade.

Earning a credential from an intensive coding bootcamp is significantly faster and more affordable than getting a four-year degree – programs typically last a few months, and most coding bootcamps cost less than $20,000. But most students want to know if a bootcamp program will help them get their dream job.

For many people, the end goal is to land a position at one of the Big Five tech companies: Apple, Microsoft, Google, Facebook, and Amazon.

We wanted to see which bootcamps are the best choice for alumni working toward a career in big tech and how they compare to traditional universities to help answer the question: are coding bootcamps as good as computer science degrees for breaking into a major company?

We analyzed LinkedIn data to find out how many alumni from each coding bootcamp landed a job at the top five major tech companies – Google, Microsoft, Amazon (and AWS), Apple, and Facebook.

LinkedIn data is a valuable tool to analyze student outcomes for coding bootcamp graduates because there's a high likelihood that alumni are active on the site. Networking plays a key role in the tech industry, and most bootcamps offer career services that encourage students to use LinkedIn, GitHub, and other networking opportunities to enter the field.

We analyzed employment rates for 370 bootcamps and limited our study to programs with locations in the U.S. or remote learning options. Bootcamps needed at least 1,000 alumni listed on LinkedIn to be considered for this study. We collected data from April 19-30, 2021. See all of the data in our appendix.

Which bootcamps have the highest employment rates at Big Five tech companies? 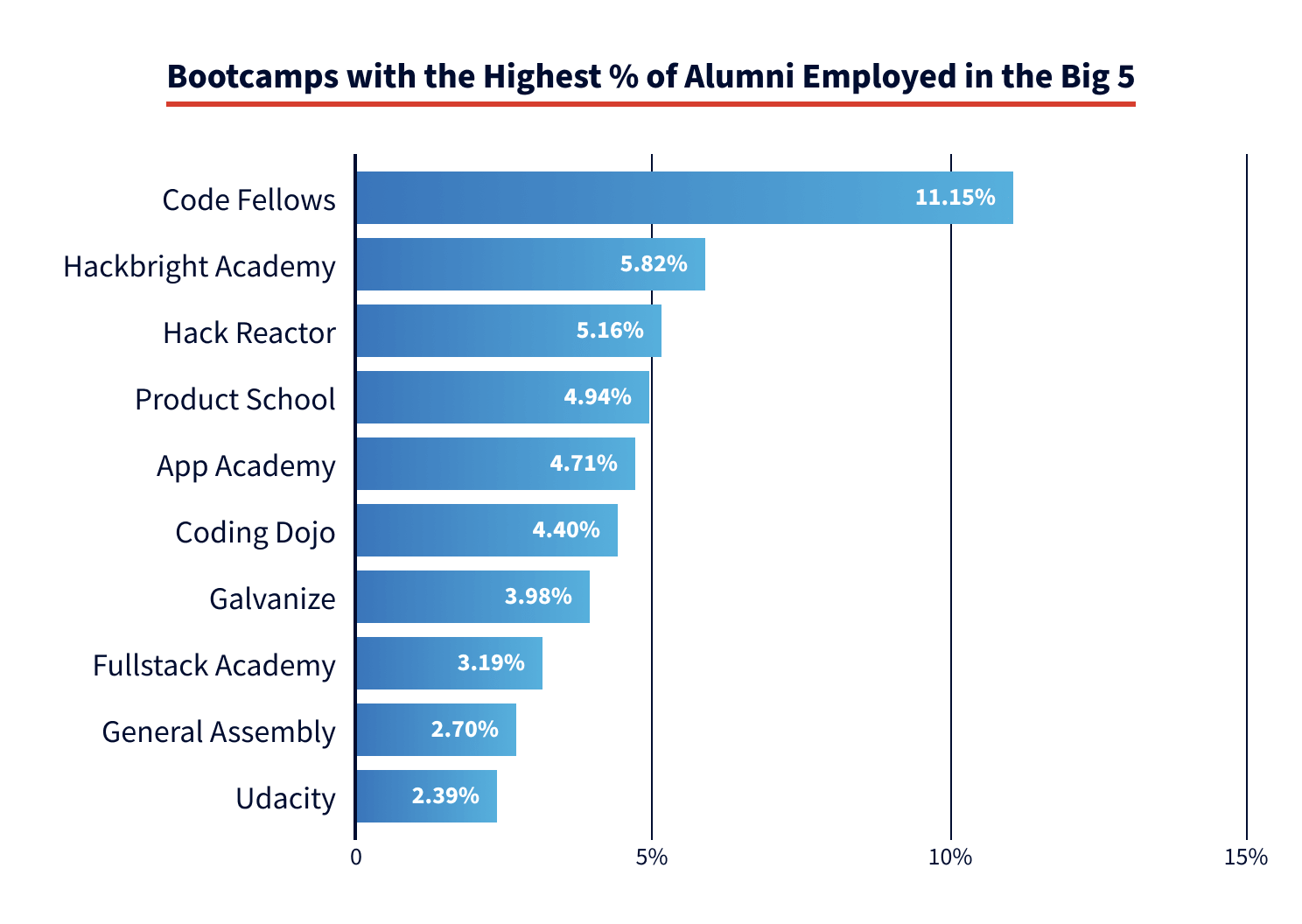 Code Fellows was the number one bootcamp for landing a job at a major tech company, with 11.15% of graduates working in the Big Five. The Seattle-based program also had the highest ratio of graduates at Amazon and Microsoft. Code Fellows has nearly 2,000 alumni listed on LinkedIn.

Hackbright Academy, an engineering bootcamp for women based out of San Francisco, ranked second, with 5.82% of 1,100 alumni in Big Five companies. Hack Reactor ranked third for Big Five employment, with 5.16% of graduates recruited at the top companies. Both had high rates of alumni working for Google.

Hack Reactor offers immersive online programs and campuses in tech hubs across the country, making it the best accessible option for in-person programs when classes resume. The software engineering bootcamp has 5,400 alumni listed on LinkedIn.

Free Code Camp, Udacity, and General Assembly had the highest numbers of total alumni at Big Five companies due to their enrollment size – 4,139 of the 200,000 total graduates from these three bootcamps were employed in major tech companies.

Coding bootcamps vs. computer science degrees: How do cost and job prospects compare?

One of the main draws of bootcamps is that they're a fraction of the price of a college degree – top universities can end up costing more than $250,000, whereas even the most expensive coding bootcamps are less than $30,000.

However, many students want to know if a computer science degree will give them the same chance of getting into a big tech company.

Coding bootcamps offered competitive employment results compared to computer science degrees from top universities – at around 10% of the cost.

Using LinkedIn data, we analyzed cost and alumni employment rates at Big Five companies for six bootcamps and eight computer science departments at traditional colleges to find out whether paying more for a degree had better results for graduates.

What we found: Overall, our findings showed coding bootcamps offered competitive employment results compared to computer science degrees from top universities, at around 10% of the cost.

While some prestigious schools – Stanford University, Cornell University, and the University of California-Berkeley – had higher rates than most bootcamps, average employment at major tech companies was similar for computer science graduates and bootcamp alumni overall. 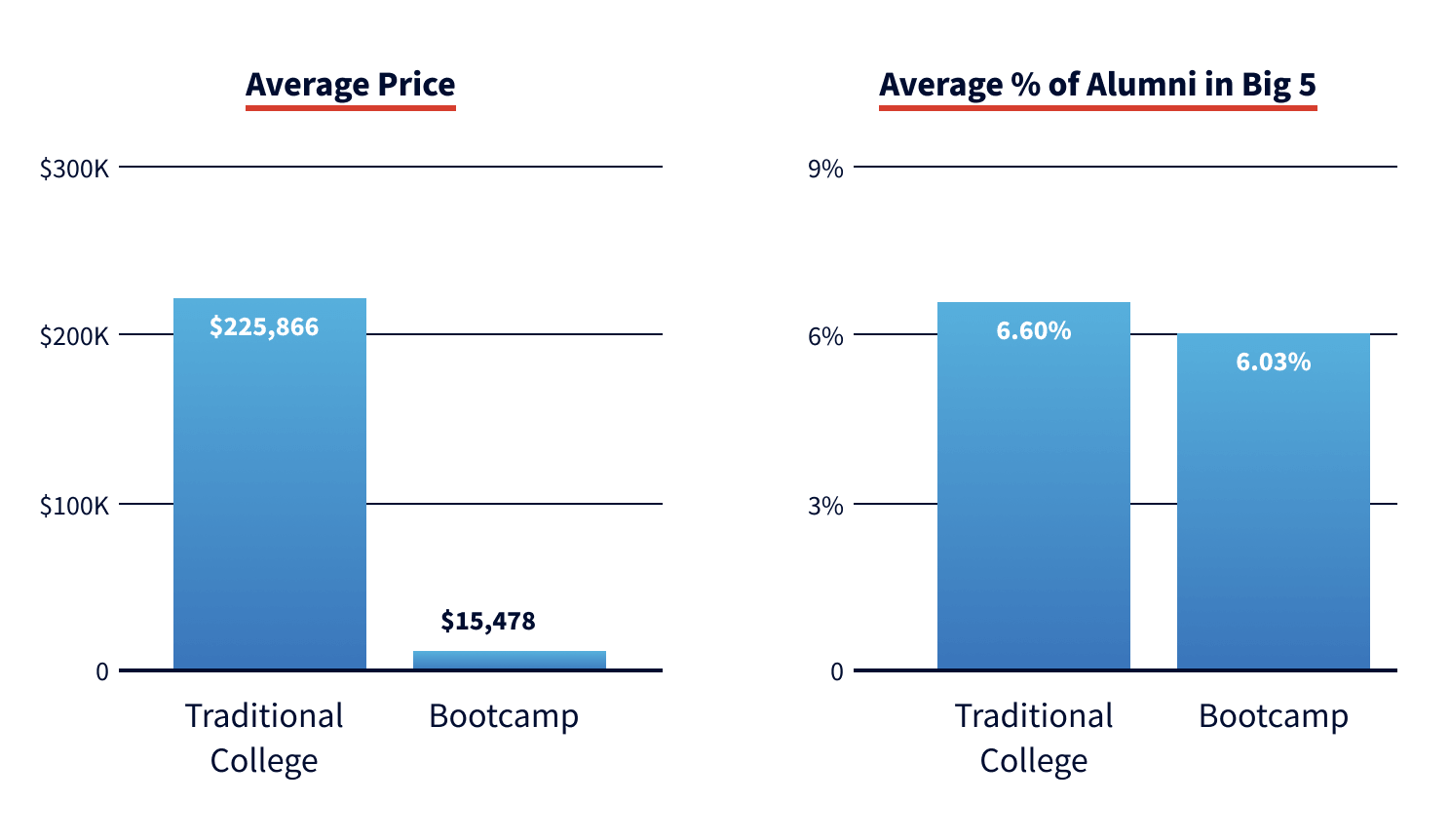 It's important to note that this comparison isn't limited to those with only a bootcamp education and no bachelor's degree. People with a range of different education and experience levels use coding bootcamps to break into the tech industry, change careers, or learn new skills for their current role.

If you're looking to go back to school and considering doing a coding bootcamp or getting a bachelor's degree in computer science, this comparison is especially useful. However, a bachelor's degree is not always a requirement for jobs with major tech companies – over half of tech executives say they'll hire applicants without a degree, including Google and Apple.

Stanford University is well-known for its prestigious computer science department and is a top university for tech recruiting. LinkedIn data shows Apple, Facebook, and Google all recruit heavily from Stanford and the University of California-Berkeley.

Hackbright Academy and Hack Reactor coding bootcamps had high rates of alumni working at Google. Both had a similar percentage of alumni at major tech companies compared to Northeastern University and Harvard University's computer science departments.

Tuition rates for both Hackbright Academy and Hack Reactor were about 10% of the cost of a degree from these schools.

Bootcamps are a small percentage of the cost of a computer science degree from these traditional universities but can have similar or higher returns for students looking to land a position with a major tech company.

Will post-pandemic recovery cause an increase in big tech employment rates for bootcamps?

While traditional computer science degrees still have a significant foothold in tech education, the industry is rapidly evolving – faster than university curriculums can change, in many cases.

These comparable job outcomes show bootcamps can be a strong alternative to traditional degree pathways. Given the massive need for short-term education options to get workers retrained after the pandemic, bootcamps are well-positioned to play a key role in the economic recovery in the coming years.

If traditional higher education institutions fail to quickly adapt to the changing needs of the workforce, coding bootcamps will likely take a growing share of people who otherwise might be pursuing computer science degrees. As they gain popularity with career changers looking to gain hands-on experience from industry professionals, major tech companies looking to recruit may begin to rely more heavily on coding bootcamps for skilled workers.