In today's world, technology is king. Whether you're performing an everyday task or relaxing at home, you're almost always using technology. For those of us that are developers, or who would like to become developers, we ask the big question… which language should we know? To answer that question, we need to first investigate the job market itself, and understand what languages are in demand today. For the purposes of narrowing down the search, this article will cover two of the top ten languages in the industry today; Python, and C# with the .Net framework.

When looking into the job market for both languages, we need to expand upon three separate categories;

With these subjects in mind, we can pinpoint just how viable the job market is for Python and C# .Net. Let's dive into the first of these four categories.

Due to Python's versatility and popularity over the last couple of years, it's not surprising that the average Python Developer makes $92,000 (Glassdoor). Even though Python has a solid average base salary, you can see from the chart below that it has a remarkably high volume towards the $137,000 mark. Showing that Python is so well versed in today's job market that it offers competitive salaries throughout the industry.

Currently developers who use Python are highly desired at high paying companies like Google, Facebook, Dropbox, and much more. As always though, location is everything. From the chart below, you can see some of the top cities in the U.S. for software engineers (payscale).

With Python's scalability to be used for Data Science, Web Development, and anything in between, it's an obvious choice that it's salary expectations are well above most languages. Python is also key to several higher-level skills which can earn you even more money. These include machine learning, natural language processing, and MapReduce. All of these can add a premium of $20,000 or more to your existing rate as a Python developer. This makes Python a sought-after language in today's market, both for companies and developers trying to break into the industry.

No matter where you go in the industry, the C# language and .Net framework is one of the most well-known pairs throughout development. Created and backed by one of the largest companies in Microsoft, we don't see either of these subjects fading from the industry any time soon. Via Glassdoor, a C# .Net developer makes roughly $79,954 on average throughout the U.S.

Though the average base pay isn't that of Python development, becoming a C# .Net Developer is one of the most reliable positions in the industry. Not only does the language allow for mobile and web development, you can also use it to create smartphone applications through environments like Unity and Xamarin. This opens the door up for not just being a C# .Net developer, but a mobile developer as well.

There hasn't been a better time to become a Python developer. As it stands, Python is one of the fastest growing languages in the industry and is sought after by most of the largest companies in the world. According to Glassdoor and Indeed, there were a combined 60,000 jobs listed for Python development between the two websites back in 2016. That number hasn't slowed down since, as Python is on the top three most sought-after languages on almost every employment website. Indeed had 41,000 job postings for Python development back in 2017, and that number rose another 5,000 just this year.

According to Hacker News Trends, Python was the second most posted about language in 2017 coming in after React (a Facebook created web framework). In terms of demand, with the salary expectations and employment opportunities in the Python developer market, it's clear that Python is at the top of its' game right now.

As far as reliability goes, look no further than C# .Net development. With 23,509 jobs on Glassdoor and 32,801 on Indeed in 2016, this duo has stayed consistent throughout the years. With the backing of Microsoft and the .Net community, it will always be looked at as a well sought-after developer role in the industry. Based on the results of a study by Similar Tech, the chart below depicts the top four frameworks currently being used within the industry, with .Net coming in at number two and Python at number four respectively.

Having roughly 17.9 million websites running the .NET framework, it's the second most widely used technology for web development in today's world only behind PHP's 42.8 million. The next closest competitor is Ruby on Rails at 2.2 million and then Python trailing in at fourth with 539,000. When looking at the big picture of becoming a C# .Net developer, you not only have multiple options to choose from, but a strong foundation run by one of the largest companies in the world in Microsoft.

Everyone's always asking, what's the next big thing? What language is going to be prominent in ten years? Fifteen years? Twenty years? Well, there really isn't a simple answer to that because all languages are different and serve a separate purpose. Luckily for us, Python solves many purposes, as it's a multi-purpose language that is used in all sectors of the tech industry. Whether it's web development with Flask or Django, Data Science with libraries for Machine Learning, Deep Learning, and Neural Networks, there are many ways to implement the language of Python. For this reason, many companies are making the move over to Python development over previous competitors. According to Forbes "Technical Skills with the Biggest Increases in Demand", Python has grown in demand by 456% from 2011 to 2015, which put it in seventh on the list. First on the list was "Big Data", which also relates to Python, as it's one of the predominant languages in Data Science today. To sum the article up, not only did Python see an increase in demand, but the use cases for Python development did as well.

Below is a chart of the top 6 most popular languages, as researched by TIOBE.

As you can see, even this year Python is still one of the most popular languages throughout the industry, only behind some of the higher-level languages like C and C++. With the rise in Python's popularity, and use case for Data Science or Web Development, it's certainly a language that we see sticking around for a very long time.

Ever since it's inception in 2002, the .Net framework has always been a staple of the technology industry. Whenever you think of frameworks, you tend to think of .Net immediately. Things have changed much over the years, even with newer languages and frameworks appearing, this duo continues to dominate much of the web development market. The wonderful capabilities of the two aren't limited to the web; however, which is why this is a language that we know will be sticking around for a long time. Having the ability to create video games, websites, or even mobile applications allows for a vast amount of flexibility in the upcoming years. Not to mention that it's backed by one of the most powerful and used IDE's (integrated development environment) in Microsoft Visual Studio. That in and of itself is worth talking about, but we will save for another day. Just note that the IDE of Visual Studio is a staple in the development community. Below you can find a short list of the many roles you can take on within the industry currently and in the future. 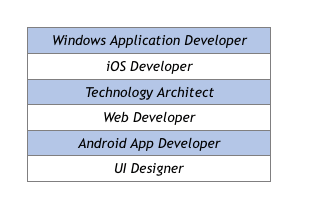 Even referring to the chart above, we can see that the language and framework pair came in at fifth and sixth respectively on the most popular list of languages today. The future of this language and framework is bright, and even being one of the older languages, it's versatility has allowed for its ability to thrive in the technology sector.

As we wrap up this post, we again ask the question, how does the job market today and in the future look for developers with these skills?

At this point in time, Python and C# are well rooted in the foundation of the technology industry, in many facets of the market. Whether you enjoy web development, mobile development, data science, or even just coding in your spare time, you can't go wrong with choosing either of these entities. They both serve a dynamic purpose in their respective categories, with powerful tools and an even better community.

In whichever language you choose to develop in, the first step is always starting. Happy coding!

Want to learn more about Coding Temple? Read what alumni have to say on SwitchUp.